Need To De-Stress? Floating In Salt Water Might Be The Solution 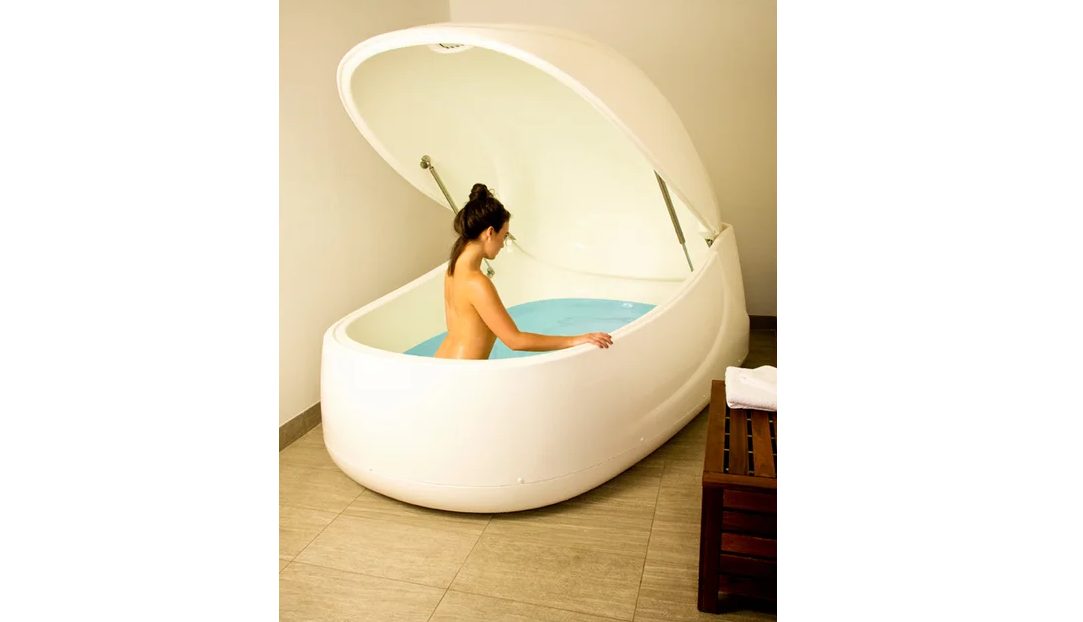 Imagine floating in outer space. It’s pitch-dark and you’re naked. Three-quarters of your body is submerged in skin-temperature salt water that makes it difficult to tell where your body stops and the water begins. It’s so dark, there’s no perceptible difference between closing your eyes or leaving them open, aside from the slight sting of salt air. For some people, this sense of total blankness is rejuvenating. Others opt to press a button to turn the lights on. This is what floating in a sensory deprivation tank feel like, and though it hasn’t been proven, a meta-analysis by researchers in the Netherlands suggests that it “can be a useful stress management tool in addition to or instead of other stress management tools.”

Flotation tanks were invented in 1954 by John C. Lilly for the purpose of researching how the brain reacts when all sensory stimuli are cut off. “At the time, people thought that if sensory input was removed from human experience that consciousness would stop,” explains David Leventhal, the co-founder of Lift/Next Level Floats, a flotation spa with locations in Brooklyn and Long Island. “[Lilly] and his team used the tank to [prove] the opposite.” In 1972, one of Lilly’s mentees, Glenn Perry, invented the first commercial flat tanks, called the Samadhi, which then prompted a handful of float centers to open, according to Leventhal. These included Tranquility Floats, the 24-hour center where Anthony Bourdain was said to float with his kitchen crew to relax after long nights out during the ‘80s. This initial heyday coincided with the AIDS crisis, however, Leventhal explains, and “due to a lot of ignorance and homophobia, people thought they could get HIV or AIDS by floating. That killed the industry and it went dormant for close to twenty years.”
But close to a decade ago, the floatation industry experienced a resurgence, mostly thanks to endorsements from public figures such as the podcast host Joe Rogan and NBA star Steph Curry. Then there was the artist Carsten Holler’s Giant Psycho Tank (1999), which exhibited at the New Museum in 2011, and was a multi-person sensory deprivation tank where multiple people could strip down, shower, and float in full view for other museumgoers. And of course, the Netflix series Stranger Things fully pushed the concept into the mainstream. (Millie Bobby Brown’s character, Eleven, is able to access a parallel universe called the Upside Down while floating; and Eleven’s mother was involved in the LSD-powered float experiments loosely based on the CIA’s Project MKUltra.)
According to Leventhal, there’s also been a recent shift in the industry. Whereas a decade ago there were around a hundred float centers nationwide, mostly in private residences, these days there are close to 1,000 multi-tank commercial float centers in North America.
While floating, Leventhal says, “people enter the theta state of brainwave consciousness, that dreamlike state we’re in right before we drift off to sleep.” It’s also the state that experienced meditators are able to access quickly. Recently, Tricycle: The Buddhist Review sent meditation teacher Loch Kelly to try floatation at Lift and discuss his experiences. In the Q&A, Kelly said that flotation was a “more contemporary, effective way” to access a meditative state. He also said he found it creatively stimulating, and had an epiphany about the book he was writing. This isn’t surprising. A 1987 study conducted by researchers at the University of British Columbia found that psychology professors who spent 90 minutes sitting alone in their office then floated for an hour had more “novel” ideas when they were inside the tank. A 2014 study by researchers at Karlstad University in Sweden found that participants who floated saw decreased stress, depression, anxiety, and pain and increased sleep quality.
Nathaniel Morris, a resident physician in psychiatry at Stanford, wrote for The Washington Post that he felt a “sense of deep ‘calm’” after floating, but that he wouldn’t recommend it to his patients until larger, high-quality studies had been completed.
When new floaters come to Lift, Leventhal and co-founder Gina Antioco ask that they arrive 15 mins early to sign a waiver, use the restroom, and complete a short orientation around using the equipment.
“Anything touching your body is going to take away from the experience because we’re trying to remove as much sensory stimulation as possible.” Taking this idea even further, they offer complimentary ear plugs, because some people are distracted by water in their ears. When she floated in 2015, writer Allison P. Davis at The Cut said she “started to panic” once a “bead of saltwater” got trapped in her ear.
“Most of our guests spend 60 minutes in the tank and some people do two to four hours.” For newcomers, Leventhal says an hour is a good starting point. “We do have some extreme floaters who do overnights,” adds Antioco. Leventhal remarks that one guest did 10 hours.
Generally, a flotation experience will set you back $65 to $100 per hour in the tank, so is it possible to DIY the experience in your bathtub? Or, as in the first season of Stranger Things, a kiddie pool? “We’re a fan of epsom salt baths, but the experience is really not translatable. We’re using 1,000 pounds of epsom salt, because that’s what’s required for you to float,” Antioco explains.
So in theory, yes, you could DIY it, but you’d need a lot of salt. Rhett Allain at Wired calculated that if you wanted to float with 75% of your body mass underwater, you’d need 333 kilograms of salt for every cubic meter of water. Granted, even if you did have a tub big enough, and enough salt at your disposal, you’d still miss out on the whole being-alone-in-a-pitch-dark-pod element of flotation. As for whether you might stumble upon the Upside Down, well, the jury’s still out on that one.
Original article courtesy of Clean Slate.
KATE DWYER JANUARY 20, 2019, 9:05 PM
Steve Kilarski2021-03-18T06:41:29+00:00