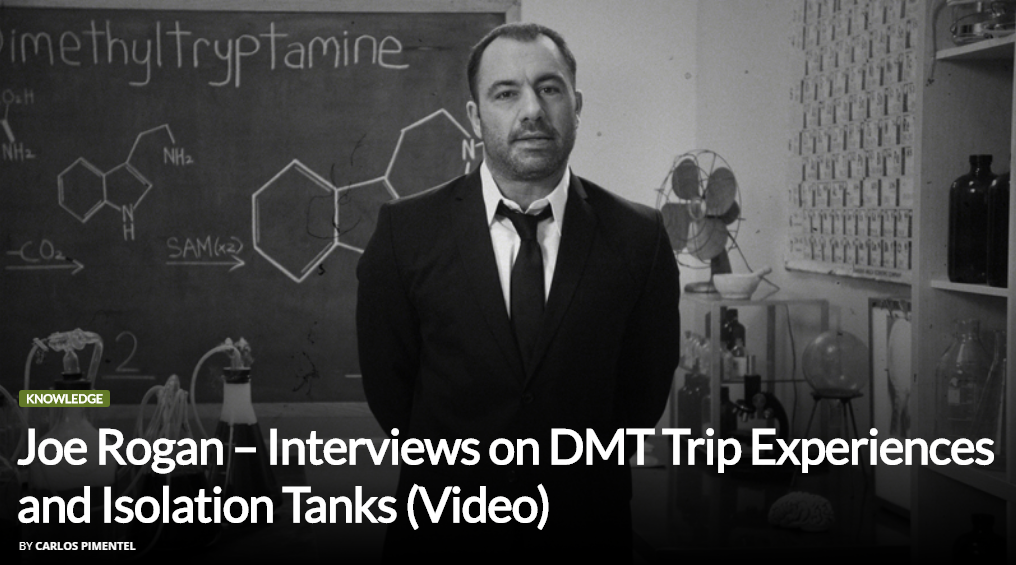 This is a blog post written by Joe Rogan after having one of his most enlightening experiences in a float tank. Joe has such a unique perspective on life and has been one of the biggest advocates for floating and he often floats in his own float tank at his home in L.A. The full blog post can be found at www.joerogan.net

It’s 1:51am LA time as I write this, and as I sit at my desk my body is covered with the white, dried Epsom salts that are 500kg thick in water of my isolation tank. Normally I take a shower as soon as I get out or I’ll get itchy, but tonight I didn’t give a fuck. I just dried off and put my clothes right back on and hurried over to the computer. I just went through what was easily the most powerful and insane tank experience I’ve ever had, and I wanted to get this out before any of it slipped away.

To describe a typical tank experience for me it’s generally a two-part process. The first part is invariably self-analytical. I take a deep, and occasionally uncomfortable look at every facet of my life when I’m in there. Every time in is different but tonight was a great one, in that the whole session was entirely positive. I’m in a really good place in my life right now, so nothing was really fucking with me while I was in there. Because I was in this really positive state, instead of the experience correcting me it played itself out as a lesson trying to open up deeper and deeper levels of personal understanding. The whole experience was a reinforcement of one of the main principles I try to live my life by, and that is the importance of being positive. Being friendly to people and spreading positive energy is what I believe to be the most important ingredients in having a happy life.

And it’s one of the least understood as well. Being nice to people is not just as simple as extending a courtesy, I think there’s something else going on with it. It energizes you. It removes stress for both people. We can make each other feel better. It doesn’t just make them feel better; it makes you feel better too for doing it. I think we are connected in ways we don’t really understand. Ever think about someone and they call you? What the fuck is that about? It’s almost like we have this incredible thing in human consciousness, but we don’t have a manual for it, so there’s all sorts of features that we’re not aware of, and we’re not really sure how to operate it correctly, but one of the most important things about this incredible consciousness is that it feeds off of positive energy.

The more I’m in the isolation tank the more that point is hammered home to me. That’s the key to happiness. It’s not financial success – it’s having good friends and spreading positive energy. As long as the basics are taken care of; food, shelter, employment, sex, etc – as long as that shit is all in order, all you really need in life to be happy is positive energy and positive people around you. That’s the key to having fun and enjoying life. You can be rich and successful as all get out, but if you don’t have good friends in your life I can guarantee you’re a miserable fuck.

I’m certainly no perfect person, and like all of us I’m a work in progress, but this has been an incredible point of evolution in my own life. It’s changed the way I think about stand-up comedy too. I have always loved to do stand up. I’m a huge fan of the art form, and it’s just a really fun and challenging way to make a living, but over the last few years I’ve started to view it from a different perspective. Of course it’s an art form, but it’s also equal parts mass hypnosis and some sort of a mass energy exchange. I mean when you break it down, what the fuck is funny? What makes laughter? What is laughter? It’s energy. It’s a positive reaction that feels good, and the way for me to get it to you the most effectively is for you to think the way I’m thinking. I’ve got to tune you all in to the way I think, and that’s where the craft of stand-up comedy comes in.

The thoughts have to be delivered with honesty, and with the right economy of words and the right humility, and enough intelligence that you trust your thoughts to my direction. And when this clicks together perfectly, the audience laughs and they actually feel better. It changes their physical state and releases all these positive chemicals in their brains. The comic feels great because they’re enjoying it, and we’re exchanging this positive energy on a mass scale.

That’s the beautiful thing about comedy, and that’s the beautiful thing about being nice to people. It’s the same thing; it’s an exchange of positive energy. I’m really still learning how important a factor this is in life, and because I’m focusing on it so much, it feels like I’m moving into a deeper place in my tank experiences. It’s like I have less holding me back.

It’s very hard to describe what I experienced in the tank tonight, but to try to put it into words it was as if in this meditative, sensory deprived state I had tuned into a way of thinking that was “alive.” It was a stream of consciousness, a path of positive thinking that I reached in my own mind, but when I tuned into it I felt like it was a living thing. It felt like it had independent thought, and that it was separate from whatever “me” is and that the right thing to do was to just surrender my consciousness and tune into it. Become a part of it.

I had tuned into a certain frequency in my mind where it felt like I was tapping into this living thing, this roaring supply of positive energy. It was literally making my body pulsate with energy. I know this sounds completely fucking bonkers and at least 45% gay, but it’s just what happened, and there’s no other way for me to describe it honestly. It felt like I was laying on the bed of some psychic creek and this positive consciousness was washing over my body like the cold water of a stream. It was just hitting me with these waves of energy that felt fucking incredible, and there was this internal struggle as to how to ride these waves correctly, because I would start to think how crazy this experience was, and then I would start to lose it. What I was experiencing was that the only way I could tap into this frequency is if I didn’t think of “me” at all. As I’m having this crazy this experience, I instantly start thinking things like, “Ok, what is the best way to describe this?” Then it starts to fade on me a little, just sort of letting me know that to continue this experience you can’t think about “you.” You have to surrender to an experience like this. You can’t control it, and you can’t freak out about it and start analyzing it on the spot, you’ve got to empty yourself and go with it 100%. It’s very hard state of mind to maintain. For one thing, you just can’t believe that this is actually happening to you, so you start thinking about the fact that “you’re” having this experience, and as soon as you do that it starts to slip away. It’s the weirdest fucking thing. If you try to hang on to any of your ego it slips away. To maintain this incredible rush or positive energy you’ve got to get to this rare neutral zone where you’re just completely empty. No fears, no resistance, no expectations, just open. A pure Zen state.

I was wobbly with it a little at first because it was such an incredible feeling it was hard not to acknowledge it, but then I started doing some deep breathing exercises and I used them to manage my state of mind and ride out the experience. I just concentrated on the breathing, and being empty, over and over – the breathing and being empty – and eventually they merged into one indistinguishable thing and I surrendered to the waves. It was absolutely fucking incredible. The experience at it’s peak was probably the most intense thing I’ve ever felt in my life. I maintained that frequency for about 15 minutes but it was so overwhelming I almost felt like that’s all I could stand. It was just so mind blowing that I couldn’t resist the impulse to think about it, and as soon as I committed to doing just that it stopped. It was really, really intense. Easily my most powerful tank experience ever. I think I can get back there and do it longer next time. That’s usually how it is with these states, as long as I get back in within a day or so I can kind of pick up where I left off, and hopefully next time I’ll be able to relax for a little longer. I’ve got to be honest though, at one point in time it was so intense I wasn’t sure if I was ever going to make it back from there. It was so insane it felt like it could override this life completely and I would exist there as a part of this gigantic, living thought for the rest of eternity. Maybe that’s exactly what happens. Either way, this is an exciting turn of events and I have a feeling much more is to come.

For more information on Joe Rogan and his Isolation Tank experiences, click HERE.