Time Out: The Rise of Sensory Deprivation Tanks

As it gets harder to live in the moment, without distraction, some swear by a forced shutdown. 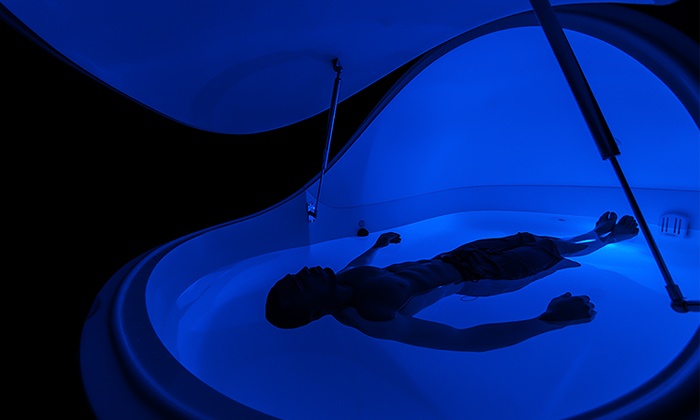 It’s an environment entirely stripped of stimuli. Even gravity feels nonexistent, inside a tank filled with nearly a foot of water and just about 800 pounds of Epsom salt. Like the Dead Sea. You climb inside and lie floating in the darkness.

To experience complete sensory deprivation is, ideally, to delve into one’s psyche. It forces contemplation of facets of life, that — similar to less “heavy” types of meditation — is meant to leave us healthier and happier. The theory is that removing yourself from all external stimulation allows your mind to suddenly dial down the RPMs, resulting in heightened in-the-moment awareness, creativity, and clarity.

Comedian and Fear Factor host Joe Rogan has been effusive in his praise of the tank. “I think it’s one of the most incredible pieces of equipment for self-help and introspective thought that you could ever find,” he told me. “It’s been one of the most important tools for me in personal growth for understanding myself, how I am, and what effect I do have on other people.”

Rogan got into sensory deprivation in hopes of achieving psychedelic experiences without taking actual drugs. He’s attained that, and, in the process, gained innumerable reasons to keep floating. “People don’t realize how much everything is a distraction,” he says.

The experience in the tank, though, can be “brutal and unflinching in its portrayal of you and your reality,” said Rogan. “That’s a terrifying thing to a lot of people — the fact that you’re alone with your unconscious thoughts, with everything that’s truly troubling you. It’s the only time that you are untethered from your body.”He’s not alone in describing that untethered feeling as a potentially intense emotional experience. Your mind begins to run rampant. With nowhere else for thoughts to go, whatever problems, worries, or guilt sits in the back of your brain has to be confronted. As it’s been put before, inside that tank, you have to face yourself.

“It can be uncomfortable in the sense that you really can’t run away from any of the things that are subconsciously troubling you, but I love that,” Rogan said. “I’m not a big fan of running away from reality. I like handling all of the issues that bother me in order to go through life truly happy. There’s a lot of people out there with ghosts, a lot of demons haunting their mind. In my opinion, this is your chance to face it head on and try to come up with a better path.”

But a fear of facing oneself shouldn’t be a deterrent to any type of therapy. Sensory deprivation has become a popular exercise throughout the world, with validated positive results that extend into everyday life. Namely stress and anxiety reduction, but also as an adjunct for chronic physical pain.

Dr. Darren Weissman, a holistic physician who has floated weekly since 1986, explains, “I really feel that it’s a result of floating and getting myself out of the way that I saw how all these multiple disciplines that activate the healing potentials of the body actually work together.”

Floating isn’t just about facing the negative aspects of life. It’s also about being more aware of, and appreciating the good. Letting the little, good moments simmer — instead of just moving to the next thing — helps them feel (and actually become) more real.

As Dr. Weissman says, it “allows us to recognize our body’s potentials. It opens us to a whole different level of awareness and of who we are. We start to notice things. It awakens consciousness.”

Matt Frederickson, an avid user of floatation tanks, says, “Since I started doing it, I’ve become more calm, especially in my work life.” A long-time sufferer of chronic neck, head, and back pain, Frederickson took his first float after hearing Joe Rogan’s praise of the physical benefits of the isolation tank on Marc Maron’s WTF podcast. “I thought it sounded interesting because I personally suffer from a lot of chronic pain, so that’s what initially drew me to it.”

Frederickson tried therapies for his chronic pain, a lot of which worked a little, but he’s found that no other practice produces results as consistently effective as the isolation tank. But, like Rogan, he gets more out of it than he initially sought. “I still use it mainly for the pain,” he says. “It really helps lessen that, but I think the secondary benefit, for me, would be the anxiety that’s tied to the pain.”

“I think people are very mentally attached to certain things and certain ways of living,” Frederickson told me. “I work in the music industry, so I attend a lot of shows. I’m constantly seeing people on their phones or giving into different distractions at these concerts. They don’t see there’s a way out of that, to be in that present moment.”While generally praised by users, sensory deprivation is met with some mainstream hesitation. Whether that stems from the germ theory — which Dr. Weissman assured me shouldn’t be a worry — claustrophobia, or even a fear of experiencing thoughts that might make us question ourselves, the floatation tank is a tool that waits patiently for those willing to give it a shot.

Most who’ve experienced isolation tanks admit that the idea of “letting go” and allowing your mind to relax takes time. Even Rogan admits that floating took some getting used to. “I remember thinking, this is something I’ll have to get comfortable with.” But with practice comes success.

Ultimately the tank can create an optimal environment, but once inside the onus remains on the person as to where they go.

Article by KYLE DOWLING courtesy of The Atlantic.