Is Floating the New Meditation?

Float Therapy is on the rise. Find out why this womb-like experience just might elevate the way you meditate. 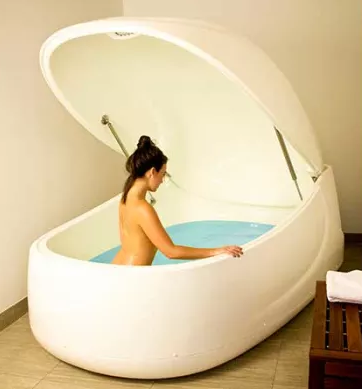 You know how relaxing it is when you finally make the time to take a long soak in the bath? Imagine stepping into a tub the size of a walk-in closet, adding 1,000 or more pounds of Epsom salt, turning off the lights and soundproofing the room, and matching the water temperature exactly to the temperature of your skin. Now, you’re floating, literally. And this womb-like experience just might be the “new” way to meditate.

Floating has been around for 40 years or so and piqued interest in the ‘80s and ‘90s, but it’s having a renaissance right now due to vastly improved float cabins as well as the popularity of mindfulness and meditation, says Jim Hefner, owner of Just Float in Pasadena, California, aka the world’s largest float therapy spa, which opened in September.

“You can point to the mindfulness thing, of course, which is happening right now,” he says. “The float tank is the most perfect place in our opinion to practice mindfulness due to the lack of distraction. But it’s also word of mouth. People come float and have a beautiful, amazing, profound, transformative experience. They tell their friends and come back.”

So, What IS Float Therapy?

Here’s what you can expect: Floating can take place in an open “float room” or a closed cabin or pod, with lighting or in total darkness, and with or without music. The water temperature is matched to skin temperature, helping you lose perception of where your body ends and the water begins. And the salt, obviously, helps you float. “The part of the brain responsible for tactile input, the two-way communication between brain and skin, turns off, because there is nothing for it to do anymore,” explains Hefner, who offers his clients one open float room and 10 cabins to choose from. Along with turning off the lights and blocking out sound (both of which are optional), these are all “tools to promote the meditative state.”

Hefner, who has practiced yoga for 15 years, says he discovered floating two and a half years ago. “The day of my first float birthed this place—I felt so profoundly amazing, I needed to share it. I’ve been an adventure athlete my entire life, so I’m very comfortable and familiar with what we call the flow state. My very first time floating, it was amazing how similar it felt.” Moreover, Hefner says floating taught him how to meditate. “I recognized the sign posts to help myself get there—now I’m familiar with what that feels like.”

David Leventhal, co-owner of Lift/Next Level Floats, another float spa that opened last year in New York City, says experienced meditators trying to achieve a “theta” state, or the lower frequency brain waves associated with deep relaxation, visualization, and creativity, may get there very quickly during a float, and newbies may also be able to get there with little effort. “Some of our clients experience a pre-sleep, dream-like state where they couldn’t tell if they were asleep or awake. That sounds like theta.”

Just Float is currently participating in a study (dubbed The Blue Mind Project) in which neuroscientists will do brain scans to compare first-time floaters with experienced floaters using an electroencephalograph (EEG), a machine used to measure brain wave activity.

“Early findings are seeing similar brain-wave activity [during a float] to very high-level meditators,” says Hefner. “We hear stories that floating reduces anxiety and blood pressure, and creates general feelings of well-being. People say they slept better and felt happier and more aware. The hypothesis is that floating reduces coritsol (the stress hormone) and increases dopamine [the neurotransmitter associated with happiness]. We want to demonstrate and validate all of this anecdotal evidence.” There is some research on floating from the ‘80s and ‘90s, but the studies used really small sample sizes, Hefner adds.

Leventhal also acknowledges that a lot of the benefits of floating are still anecdotal, but says he sees “amazing things” every day. “It provides literally instantaneous pain relief for people with chronic pain conditions. One man who had broken his back the year before and had lingering pain felt great instantaneously. It’s intuitive … Epsom salt has been viewed as healing for centuries, and in a float tank, almost all gravity is taken off the spine. One client with TMJ (pain during jaw movement) who used to go to sleep every night with a mouth guard doesn’t need the guard since starting to float. Pregnant women seem to love it – it helps them deal with taxing on the body of carrying a child. Also clients with eczema and psoriasis say their skin looks and feels better when they float than when use prescription medicine.”

Lift was kind enough to offer this initially skeptical reporter a complimentary 1-hour float. While I came in thinking I might want to hop out after 30 minutes, I soon forgot all about the time and started to simply drift away, perhaps even into that pre-dreamlike state. I also felt energized and in an upbeat mood for the rest of the day, and the salt made my skin and lips feel silky.

“We’re used to a lot of people saying, ‘I’ll be shocked if I make it a half hour,’ then the music comes on to signal that the float is over and an hour has gone by,” says Lift’s other co-owner, Gina Antioco.

Lift offers three Evolution Float Pods, which resemble giant eggs with clamshell lids. (There is no pressure to close the lid if you don’t feel comfortable doing so, but the pods are large and not “coffin-like,” as Antioco says they once were in the ‘80s). In these pods, you can control the lighting as well as the music, but most clients eventually turn off both, adds Antioco. They also have two Ocean Float Rooms adorned with lights on the ceiling that look like stars (I chose the Ocean Float Room). You can choose to have the lights on or off in this room, but you cannot control the music. Once the floater is comfortable, Lift encourages everyone to at least try floating with the lights out and the music off to “see where their brain takes them.”

Another common concern: nudity. Floating is something you do in your birthday suit, but you’re completely alone with the door locked and the water is clean. Lift’s water is completely recirculated at least 3 times between each float, then treated with either a combination of a germicidal UV lamp, ozone, and hydrogen peroxide, or with a small amount of bromine. Plus, clients are asked to shower before and after each float. Similarly, Just Float also asks clients to shower before and after each float and purifies the water four complete times between floats using a combination of hydrogen peroxide and UV sterilizers.

The Future of Floating

Mark Frickel, who manages a team of consultants and salespeople at FloatationTanks.com, says there were approximately 80 flotation centers at the end of 2010 and now there are more than 300 in the U.S. He also predicts that 2016 will be the biggest year ever for floating.

“Those of us within the float therapy community all knew that floating is something special, something really beneficial that would resonate with a lot of people in a lot of different ways once the public was introduced to it,” says Frickel, noting that he’s received sales inquiries from doctors, chiropractors, and massage therapists. “Many people will come in to try it at least once, and they often find that they can integrate floating into other practices or float regularly as a tune-up to reduce stress, manage pain, or just get in better touch with themselves. People find that a good float sets a great pace for the next few days.”