By now few are unaware that the activity of the human brain creates patterns of electrical energy, that the electrical signals of the brain can be monitored by placing electrodes against the scalp, and that a device known as an electroencephalograph (or EEG ) can record the brain waves by means of a sensitive mechanical pen tracing, across a long sheet of paper, a mountain range of jagged lines – as immortalized in a thousand science fiction movies and television hospital series. Flat line equals brain death – cart him away, nurse. These brain signals have a tendency to fall into certain patterns which scientists have classified in four types: 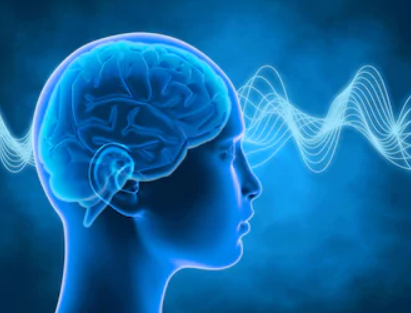 Beta
When the brain is generating mostly beta waves, whose frequency is about 13-30 Hz ( that is, a rhythm of 13 to 30 cycles per second ), it is in what is called its waking rhythm: The brain is focusing on the world outside itself, or dealing with concrete, specific problems.

Alpha
As the brain waves slow down they take on a more coherent rhythm, and can be seen on the EEG as a regular sawtooth pattern at about 8 – 12 Hz. These waves are often present when the brain is alert but unfocused, and most people generate alpha waves when their eyes are closed, even if only bursts of one or two seconds. Frequently, alpha waves are associated with feelings of relaxation and calmness.

Theta
As calmness and relaxation deepen into drowsiness, the brain shifts to slower, more powerfully rhythmic waves with a frequency of about 4 -7 Hz. Everyone generates these theta waves at least twice per day: in those fleeting instants when we drift from conscious drowsiness into sleep, and again when we rise from sleep to consciousness as we awaken. The theta state is accompanied by unexpected, unpredictable, dreamlike but very vivid mental images (known as the hypnagogic images ). Often these startlingly real images are accompanied by intense memories, particularly childhood memories. Theta offers access to unconscious material, reverie, free association, sudden insight, creative inspiration. It is a mysterious, elusive state, potentially highly productive and enlightening, but experimenters have had a difficult time studying it, and it is hard to maintain, since people tend to fall asleep as soon as soon as they begin generating large amounts of theta.

Delta
Cycling at an extremely slow frequency (.5-4 Hz), delta rhythms are produced when people are deeply asleep or otherwise unconscious. Throughout the 1960s, experimenters discovered that with the use of equipment that electrically monitored selected physical functions, humans could learn to generate those functions at will. While biofeedback equipment could be made to monitor just about any physical function, researchers often focused on the production of alpha waves. Stress was a problem shared by almost everyone, and an accepted antidote to stress was relaxation; since alpha waves accompanied relaxation, and were relatively easy to learn to produce at will, clinical biofeedback experts assumed that if you learn to generate alpha waves, you would automatically become relaxed. In the early 1970s, with the advent of relatively inexpensive equipment came an explosion of interest in biofeedback, and alpha became the catchword seized on by the mass media and seekers of expanded consciousness.

Research:  Almost unnoticed amidst the hoopla surrounding alpha was an earlier study by Akira Kasamatsu and Tomio Hirai which analyzed EEG tests of Zen monks going into deep meditative states. The study showed that as the monks went into meditation they passed through four stages: the appearance of alpha waves, an increase of alpha amplitude, a decrease of alpha frequency, and finally ( for those with the most skill at meditation), the production of long trains of theta waves. Interestingly, the four states “were parallel with the disciples’ years spent in Zen training.” In other words, the more meditative experience a monk had, the more theta he generated 9 i.e., those monks who had more than twenty years of experience generated the greatest amounts of theta waves). And, even in the depths of theta, the monks were not asleep but mentally alert.

Elmer and Alyce Green, biofeedback researchers at the Menninger Clinic, became interested in the theta state (they’d been studying the brain waves of swami Rama when he told them: “Alpha is nothing!”) and began training subjects to generate theta waves consciously. They found theta “to be associated with a deeply internalized state and with a quieting of the body, emotions, and thoughts, thus allowing unually ‘unheard or unseen things’ to come to consciousness in the form of hypnagogic imagery.” As their theta training groups progressed, they were surprised to find a “high frequency of subject reports indicating integrative experiences leading to feelings of psychological well-being.” Many of the subjects began reporting spontaneous improvements in personal relationships. Many vivid memories of long-forgotten childhood events arose: “They were not like going through a memory in one’s mind but rather like an experience, a reliving.” Subjects reported both physical and psychological wellbeing, and Greens discovered that people with the most hypnagogic imagery were “psychologically healthier, had more social poise, were less rigid and conforming, and were more self-accepting and creative” than those who produce little or no hypnagogic imagery.

The Greens were surprised by their findings, and concluded that the theta state caused people to “experience a new kind of body consciousness very much related to their total well-being.” Physiologicically, the theta state seemed to bring “physical healing, physical regeneration.” In the emotional domain, the theta state was “manifested in improved relationships with other people as well as greater tolerance, understanding, and love of oneself and of one’s world.” in the mental domain, theta ability involves “new and valid ideas or syntheses of ideas, not primarily by deduction, but springing by intuition from unconscious sources.”

Understanding excited by the extraordinarily beneficial powers of the ability to generate theta waves, the Greens undertook a research project they called Brain-wave Training for Mental Health, to train psychotherapists to assist their clients in learning the technique. The problem is that it is not easy to learn to produce theta waves; first of all, theta usually leads to sleep. And as the Greens point out, “In order to produce theta consciously it is necessary to have a quiet body, tranquil emotions, and quiet thoughts all at the same time.” Some cynics might retort that if one had a quiet body, tranquil emotions, and quiet thoughts, one would have no need for any training. The fact is, few people know how to achieve this happy simultaneity, and few have the necessary discipline and patience to learn. After all, it seems to take Zen monks some twenty years to be able to generate this state at will.

But as anyone who has floated is aware, the quiet body, the tranquil emotions, and quiet thoughts formula is a perfect description of the floater’s circumstances. Could it be that floating increases and facilitates the production of theta waves? Research indicates that this is indeed so. As early as 1956, John Lilly was noting that the state of mind in the float tank was “hypnagogic,” full of ” reveries and fantasies,” with much visual imagery and many childhood memories, and mental events that were “surprising to the ego”- all characteristics of theta activity. J.P. Zubek, investigating “EEG changes in perceptual and sensory deprivation,” reported that theta waves became prominent. A recent study by Gary S.Stern, associate professor of psychology at the University of Colorado at Denver, found that” the significant effect of floating…indicates that individuals who had floated in the isolation tank for one hour significantly raised their theta level.”

A large controlled study by Professor Thomas E. Taylor, of Texas A & M, analyzed the effects of floating on several types of learning abilities, comparing floaters with people in a relaxed state in a dark, quiet room. Both the float and nonfloat groups measured with EEGs, and the study found that floating leads to an increase in the generation of theta waves.

Biofeedback expert Thomas Budzynski, clinical director of the Biofeedback Institute of Denver and professor of psychiatry at the University of Colorado Medical Center, is currently doing research involving the measurement by EEG of the brain during hypnosis. He has concluded that float tanks increase the production of theta waves, and believes that this has great potential for opening the mind to learning: “We take advantage of the fact that the hypnagogic state, the twilight state, between waking and sleep, has these properties of uncritical acceptance of verbal material, or almost any material it can process. What if you could cause a person to sustain that state, and not fall asleep? I believe floatation tanks are an ideal medium for doing that.”

Budzynski’s observation that the tank is ideal for maintaining wakefulness while in the theta is supported by almost everyone who has done work in the area of sensory deprivation. Jay Shurley and John Lilly were probably the first to point out that the tank facilitates wakefulness in most users. Others (A.M. Rossi and colleagues, for instance) have since indicated various reasons for this, such as the body’s natural homeostatic mechanism to maintain alertness, the “sensoristat,” which creates a unique combination of high brain arousal and low muscular arousal. It’s important to emphasize this point: Usually when you enter the theta state you fall asleep, but the tank causes the floater to generate large amounts of theta, yet remain awake. This means that the vivid hypnagogic imagery, the creative ideas, the eureka moments and lightbulb thoughts, the “knowing” feeling, the “integrative experiences” mentioned by Elmer and Alyce Green, with all the resultant beneficial effects on body, emotions, and mind, are available to the floater; in the tank these experiences come while the floater remains awake, so they remain a part of the floater’s conscious mind even after he has emerged.

© Michael Hutchinson “The Book Of Floating”