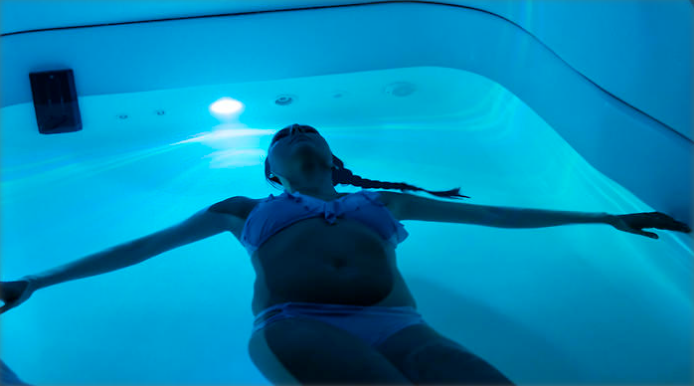 I first heard about floatation therapy about two years ago. My good friend Lauren was undergoing cancer treatment – a brutal regime of chemotherapy, radiation, surgeries and medications in order to prolong her life and to help reduce the pain that this combination of the disease and its treatment caused her. After trying numerous therapies to help with her ongoing, often debilitating pain –Lauren tried floating.

In the simplest of terms, floatation therapy involves lying on your back in an extremely salty, shallow, body temperature tank of water.  The tank has a lid you can shut while inside which reduces all stimulation such as sound, touch and light allowing the person inside to relax for usually an hour at a time.

Floatation tanks are used by a range of people and organisations – from AFL clubs and the Australian Institute of Sport, to individuals like my friend. Because they offer such a unique experience by the way they reduce stimulation, floatation therapy allows those undertaking the treatment to effectively switch off mentally and the Epson salt water can also help with muscular pain and aches, assisting physically as well.

After Lauren completed her first float I still recall her calling me on the phone afterwards.

Lauren continued to float regularly after this and advocated for the treatment until passed away in April this year.

As well as muscle pain and injury, floatation tanks may also assist with the treatment of psychological conditions such as stress, anxiety and depression.

Although I never have, and hopefully never do, experience the sort of physical pain that my friend endured, my brain is a pain of another kind. I have experienced depression and anxiety for a significant period of my life, although it was only officially diagnosed about a decade ago. And it was for this ‘switching off’, that I made a floatation therapy appointment of my own. I am so glad I did.

When I arrived at the local wellness centre which offered floatation therapy, my brain was doing its usual five million thoughts per second routine buzzing like I had just consumed a five-shot latte. I was eager, although slightly wary of how effective it might be given my current hyper alert state.

Within the private room was a tank that resembled something a bit space age or sci fi, inside it was anything but. There was just a small amount of highly concentrated Epsom salt water, a light and a button to press if you need to call for help.

There was also a lid which you could slide to shut once inside, but that was optional, and the light you could turn off for the most stimuli free experience. I did both – because when in Rome.

The water was heated to body temperature so when you lay in it, it was immediately comfortable, and eased you in to the experience.

The water was heated to body temperature so when you lay in it, it was immediately comfortable, and eased you in to the experience.

Although the water is shallow you immediately float. The high ratio of magnesium sulphate is 10 times higher than that of the ocean and also higher than that in the Dead Sea which means you don’t turn, you don’t need to put your arms or legs out to stabilise yourself, you simply float on top of the water. Inside it is quiet and dark – there is nothing but yourself.

In the first 15 or so minutes I found myself still looking around the tank in darkness searching for something, anything, but there wasn’t anything to find. I then began thinking of what I had to do later that day, making the usual lists in my head. Once that was complete, I thought to myself – this is going to be a long hour. But then something happened somewhere between 15 minutes and half an hour, I found myself in a little zone of Zen.

My eyes were closed, my body was still and then I realised, so was my mind. I wasn’t planning, or thinking or worrying or looking, I was just floating in every sense of the word – mind, body, spirit.

And then, in what seemed like the blink of an eye, my hour was up.

As I left the tank I felt different than I did when I had stepped into it an hour before. I wasn’t tired, but my mind wasn’t buzzing around like it had been. There was a calmness, a ‘whatever’ about the concerns I had when I woke up this morning, and it was honestly so relieving to feel less than I normally did.

“Floating switches off the cerebellum allowing our body and mind to relax and for healing to begin,” explains Toni Bastille, President of the Floatation Therapy Australia. It helps the body’s central nervous system to calm down, providing benefits both physically and mentally.

“Floating switches off the cerebellum allowing our body and mind to relax and for healing to begin,” explains Toni Bastille, President of the Floatation Therapy Australia.

When floatation therapy is used in conjunction with other types of therapy and treatments, it can help the body and mind relax to assist with the effectiveness for other treatments such as physiotherapy.

That night after my floatation therapy treatment, going to sleep wasn’t the usual process of tossing and turning and thinking and worrying. It was quick to come on and it stayed with me for the entire night, something of a rarity for me.

Although the next day I felt like my normal self again, like most things in life ongoing use and treatment is the key in experiencing the most benefits and for more extensive periods of time, which is why you will find me again, very soon in a tank floating my anxieties away.

Article written by Shona Hendley and courtesy of SBS.com.au

If you would like more information on the many BENEFITS of Floatation Therapy and how this modality can assist with Stress & Anxiety Relief please contact Salt Float Studio in South Perth on (08) 6277 0060 or email info@saltfloatstudio.com.au.