Can You FLOAT Your Way To Better Sleep? 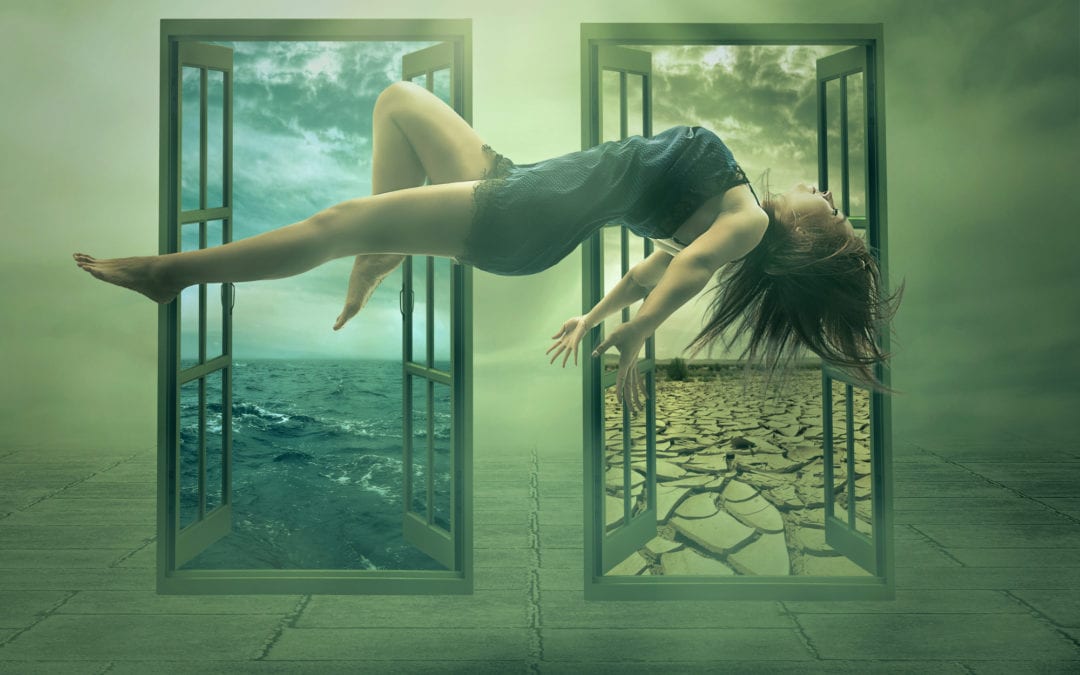 I had a patient in my office recently for an appointment, and she couldn’t wait to tell me about an experience she’d had. “I did my first float,” she said, her expression both excited and serene. She described the experience as nothing less than transformative. She’d been a little nervous at first, she said, but she found it surprisingly easy to relax, once she was floating in the pool of warm water, wrapped in silence and darkness. “It was the most amazing thing,” she confided. “I thought maybe I’d fallen asleep, but I was awake the whole time. My mind just went into a whole different place, somewhere so deeply peaceful. For once, I had no sense of time.” She went on to tell me she’d been trying to meditate for years, and floating brought her to what she felt was a meditative mindset she’d never been able to experience before. The calm and relaxation she felt after her float session stayed with her for some time. She had already booked her next appointment.

Float therapy has been around for decades, since the 1950s when scientists developed early flotation tanks. Since then, scientific inquiry into the effects and possible benefits of float therapy continued for many years without much notice from the broader scientific community or the public at large. But in recent years, interest in floating has really taken off. There’s been an uptick in scientific interest in and study of floating. And the general public is increasingly interested in the potential benefits of floating for mental and physical health. One way to tell? Float centers are popping up all across the country, places where people can schedule a float session like you’d book an appointment for a therapeutic massage.

With float therapy experiencing something of a breakthrough—and inspired by the conversation with my patient–now seems like the perfect time to take a look at floating, and how it may help improve sleep. I’ve been working as a scientific adviser to a company, True REST, that is working to make float therapy widely accessible. What I’ve learned about the potential benefits of floating for sleep—and the characteristics and benefits it shares with meditation, one of the most deeply sleep- and health-promoting practices—are really interesting and promising.

Ready to dive in?

What is floatation therapy?

Simply put, float therapy uses the act of floating in water, in a carefully controlled environment, to induce a deep state of relaxation. By significantly reducing the external presence of sensory information—that’s everything from sight, sound, and smell to touch, temperature, taste, sense of body position, and even sense of gravity—float therapy quiets activity in the central nervous system, and relaxes the body and mind.

In technical terms, floatation therapy is a form of what’s known as Reduced Environmental Stimulation Therapy, or REST. Floating dramatically limits the sources of external sensory stimulation for the mind and body to process. That spurs the brain and body to shift its attention away from outside stimuli, and opens up awareness of our internal states, mental and physical. Scientists have over years of study identified a broad range of therapeutic benefits of REST in treating mental and physical health problems, including anxiety disordersand post-traumatic stress disorder, ADHD, substance use disorder, insomniaand fibromyalgia.

The mental and physical state that can be achieved by floating is often compared, by both scientists and practitioners, to that of meditation. And as you’ll soon see, research investigating float therapy suggests it may deliver similar states of deep relaxation as those achieved by highly experienced meditation practitioners.

What are the health benefits?Scientific study suggests float therapy may be effective in relieving stress, reducing pain, alleviating anxiety and depression, enhancing cognitive performance creativity, boosting immune function—and yes, helping sleep. Like meditation, float therapy is a non-pharmacological intervention. (I wrote just recently about the latest FDA warnings about prescription sleep medication. While these medications can be useful in some cases, they’re not broadly best suited for widespread and long-term use. Natural, non-chemical therapies for sleep are critical agents in helping those of us with sleep problems rest better.)

How does floating work?

People who use floating speak of the sense of profound calm, focus and well being that accompanies the practice. How does floating in a pool of water lead people to a state of deep rest and refocusing?

Within the float chamber, the temperature of the air and water closely matches body temperature. Chambers are also light-proof and sound-proof. You lie on your back—floating without effort, thanks to that salty water. Float sessions typically last between 45-90 minutes.

As you might have gathered from my patient’s enthusiastic story of her experience, the experience of flotation can be, for many people, a profound one. Practitioners speak about the unprecedented relaxation and letting go physically that can occur. They also highlight the emotional and psychological effects, of leaving a float session feeling mentally renewed and refreshed, with a deep sense of serenity and peace. What’s transpiring in the brain and body to create such a sense of physical and mental transformation? Scientific research offers us some important clues.

How floating affects the body and mind

Though we’re still relatively early in scientific exploration and documentation of floating and its therapeutic benefits, there is a growing body of research that suggests the practice of float therapy creates a distinct series of physiological and psychological changes in the brain and body—changes that can benefit sleep, health, and daily performance. Here, I’ll highlight several those effects on the body. Keep in mind that we’ve still got a lot to learn about what floating does, and there may be more to come.

Floating can lower cortisol.Several studies have measured significant reductionsto cortisolin people after they’ve engaged in floating. Cortisol is a hormone with broad-reaching effects in the body. Cortisol is involved in regulating metabolism, and plays an important role in immune system functioning, in part by controlling inflammation. Maintaining healthy cortisol levels is key to protecting mental and physical health. Too often, cortisol levels run chronically high, thanks in large part to stress and poor sleep.

Cortisol is intricately connected to both stress and sleep. A stimulating, alerting hormone, cortisol—like other hormones—runs on a 24-hour bio clock in the body. Cortisol levels rise to their peak first thing in the morning, helping deliver us the alertness and energy we need to wake and start being active. While fluctuating throughout the day, cortisol gradually declines as evening approaches, reaching its lowest levels in the middle of the night. Elevated cortisol levels can interfere with sleep, particularly when cortisol remains high in the evenings. In turn, a lack of sleep can aggravate cortisol levels outside of a healthy range.

What else contributes to high cortisol? The hormone’s role in stress is one very powerful way cortisol levels can become chronically elevated. Cortisol is probably best-known as a stress hormone. That’s because it is a major player in the body’s fight or flight response. When faced with a stressor of any sort, our bodies respond with a sharp increase in cortisol. When stress is routine, cortisol remains high. That can interfere with our ability to fall asleep and stay asleep. Think about the times you’ve been under stress, and how tough it can be to drift off. Even after you do, you’re likely to wake during the night. That is cortisol at work. High cortisol levelstypically go hand in hand with diminished levels of melatonin, a hormone that is essential for paving our way to sleep each night.

Too much cortisol doesn’t only contribute to sleep problems. It creates other health issues, including poorly regulated blood sugar, suppression of the immune system, weight gain, microbiome imbalance and gastrointestinal issues including irritable bowel syndrome, and chronic anxiety.

Floating can improve other markers of stress. Several studies show that exposure to floatation therapy can lead to reductions in other key physiological and psychological signs of stress and anxiety. Float therapy has been shown to lower blood pressure, reduce muscle pain and tension, improve fatigue and lower anxiety levels, while increasing positive mood, energy, and relaxation. For example, a 2018 study conducted by one of today’s leading scientific investigators of flotation therapy, Dr. Justin Feinstein, found significant reductions to blood pressure(an average of more than a 12-point drop in diastolic pressure) occurred in a group of participants during floating. At the same time, study participants experienced significant relief from muscle tension and mental anxiety. Dr. Feinstein, a neuropsychologist who is an assistant professor at Oklahoma’s University of Tulsa and a principal investigator at the Laureate Institute for Brain Research, is deeply involved in studying the therapeutic potential of floatation, specifically its value in treating mental health conditions including anxiety, addiction, eating disorders and other psychological conditions. These marked relaxation changes that are associated with floating that Dr. Feinstein and other scientists have measured are promising preliminary indicators of the potential float therapy has as a tool for treating mood disorders and also sleep disorders.

Floating can shift brain consciousness to a more relaxed (and creative) state.Several studies demonstrate how floatation therapy can move people into different, more relaxed states of consciousness, including the kind of deep relaxation where time perception is alteredand creativity is enhanced. Remember my patient who said she lost track of time while floating? That experience has been documented in scientific study. Recent analysis shows that the mind’s consciousness during floatingmay take on characteristics of stages 1 and 2 sleep. And other studies have shown that floating increases the presence of low frequency delta and theta brain waves, which are also present during sleep.

A shift into the state of deep relaxation where that allows time to slip away suggests some distinct changes to brain wave activity are happening during floating, likely similar to what happens in the brain during meditation. Studies have shown meditation alters brain activity, decreasing high-frequency beta waves and increasing low-frequency theta wave activity in different parts of the brain. Theta brain waves occur when we’re experiencing deep levels of relaxation, and also during the lighter stages of sleep. A waking brain that’s populated with theta waves is likely to be in a state of flow—that wandering, daydreaming, internally focused state of consciousness that is linked to creativity and to mental rejuvenation. (Beta waves, on the other hand, reflect a brain that is externally focused and task driven, responding to external stimuli, planning and meeting goals.)

Floating may provide benefits from magnesium.Magnesium is an essential macro-mineral we need in large quantities. It’s a mineral that keeps our muscles and nerves working well, that regulates mood and stabilizes sleep-wake cycles, that facilitates all sorts of enzyme-related biochemical reactions that keep our bodies functioning as they should. Our bodies don’t produce magnesium—we must take it in from outside sources. Magnesium deficiency is common; estimates suggest that most men and women in the United States aren’t getting enough magnesium. A lack of magnesium can:

I’ve written in depth about how magnesium benefits sleep, and why it’s so important to maintain healthy magnesium levels for overall mental and physical health. When we’re lacking in magnesium (as many of us are), we’re likely to be more fatigued, more stressed, more tired and low in energy. There is ongoing scientific question and debate about how effectively magnesium can be absorbed into the body through the skin. Though it’s not yet clear whether floating can deliver magnesium as a nutrient to the body, magnesium found in float water is likely to contribute to the deep physical relaxation of the experience.

Next, we’ll take a closer look at what the latest science says about float therapy’s benefits for sleep and sleep-related conditions, from insomnia and anxiety disorders to chronic pain. I’ll also share some tips for getting the most out of floating, for sleep, mood, and health.